DOUGHNUT ECONOMICS : SEVEN WAYS TO THINK LIKE A 21ST-CENTURY ECONOMIST

Kate Raworth is an economist focused on exploring the economic thinking needed to address the twenty-first century’s social and ecological challenges. She teaches at Oxford University’s Environmental Change Institute, where she is a senior visiting research associate. She is also a senior associate of the Cambridge Institute for Sustainability Leadership and teaches on the Economics for Transition programme at Schumacher College.Kat has a BA in politics, philosophy and economics, and a MSc in economics for development, both from Oxford University.

She is a member of several advisory boards, including the Stockholm School of Economics’ Global Challenges programme, Surrey University’s Centre for the Understanding of Suistanable Prosperity, and Oxford University’s Enviromental Change Institute. Her internationally acclaimed idea of Doughnut Economics has been widely influential amongst sustainable development thinker, progressive businesses and political activist, and she has presented its core ideas to audiences ranging from the UN General Assembly to the Occupy movement.

The Doughnut consists of two concentric rings: a social foundation, to ensure that no one is left falling short on life’s essentials, and an ecological ceiling, to ensure that humanity does not collectively overshoot the planetary boundaries that protect Earth’s life-supporting systems. The overall target should be to remain within the doughnut to ensure that we neither fall into conditions of social inequality and suffer shortfalls, such as in water and food, nor allow growth to overshoot into threatening environmental collapse. In her words, this model ‘draws on diverse schools of thought, such as complexity, ecological, feminist, institutional and behavioural economics’. This multidisciplinary promise was the most appealing element of the book.

Who want to be an economist? Doughnut economics consists of seven major chapters:

from gdp to doughnut

from self-contained market to embedded economy

Ch4 : Get Savvy with Systems

from mechanical equilibrium to dynamic complexity

from growth will even it up again to distributive by design

from growth will clean it up again to regenerative by design

Ch7 : be agnostic about growth

from growth addicted to growth agnostic.

In the first chapter, it was stated that for most of history, economics was not interested in sustainable growth but in how to properly manage households. Consequently, nobody considered economics a scientific discipline for millennia: it was an art form, more akin to literature than to mathematics. Sure, there are some rules you should follow, but there are many impractical goals to achieve as well.

And this left a void where there was none: suddenly, nobody knew what was the goal of economics, even though originally the field was founded mainly with its objective in mind. Well, that’s where Doughnut Economics comes in.

Doughnut economics has a pretty discernible goal: to reach the sweet (and safe and just) spot between the social foundation of human well-being and the ecological ceiling of planetary pressure for all of humanity.

Doughnut Economics proposes an economic mindset that’s fit for the 21st century context and challenges. It’s not a set of policies and institutions, but rather a way of thinking that brings about the regenerative and distributive dynamics that this century calls for. Drawing on insights from diverse schools of economic thought – including ecological, feminist, institutional, behavioural and complexity economics – it sets out seven ways to think like a 21st century economist in order to bring the world’s economies into the safe and just space for humanity.

The starting point of Doughnut Economics is to change the goal from endless GDP growth to thriving in the Doughnut. At the same time, begin economic analysis by seeing the big picture and recognising that the economy is embedded within, and dependent upon, society and the living world. Doughnut Economics recognises that human behaviour can be nurtured to be cooperative and caring, just as it can be competitive and individualistic.

It also recognises that economies, societies, and the rest of the living world, are complex, interdependent systems that are best understood through the lens of systems thinking. And it calls for turning today’s degenerative economies into regenerative ones, and divisive economies into far more distributive ones. Doughnut Economics recognises that growth is a healthy phase of life but nothing grows forever and things that succeed do so by growing until it is time to grow up and thrive instead.

Overall, Doughnut Economics is excellent at describing economic concepts in accessible terms, and could be read as an add-on to an introductory economics textbook. Raworth’s in-depth summary of climate change is very well argued and would be useful for challenging climate change denial: in this sense, the book is more about sustainable development than economics. 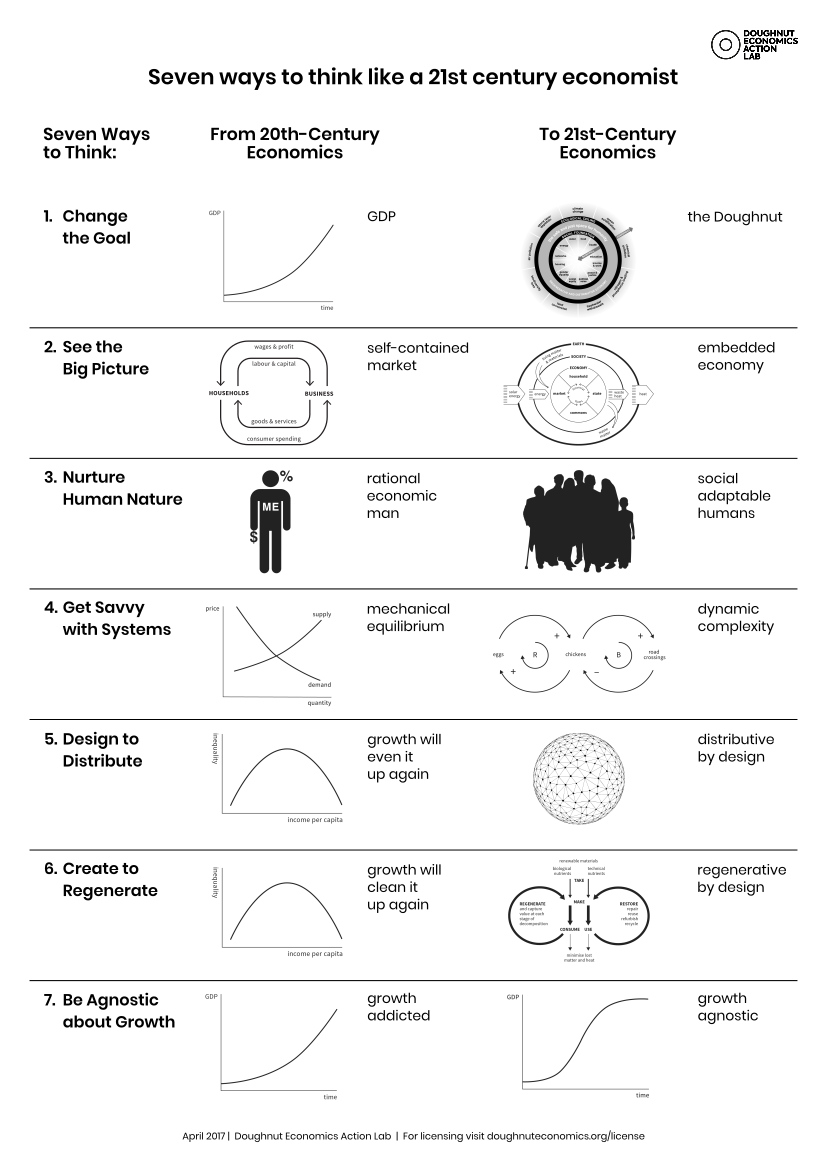 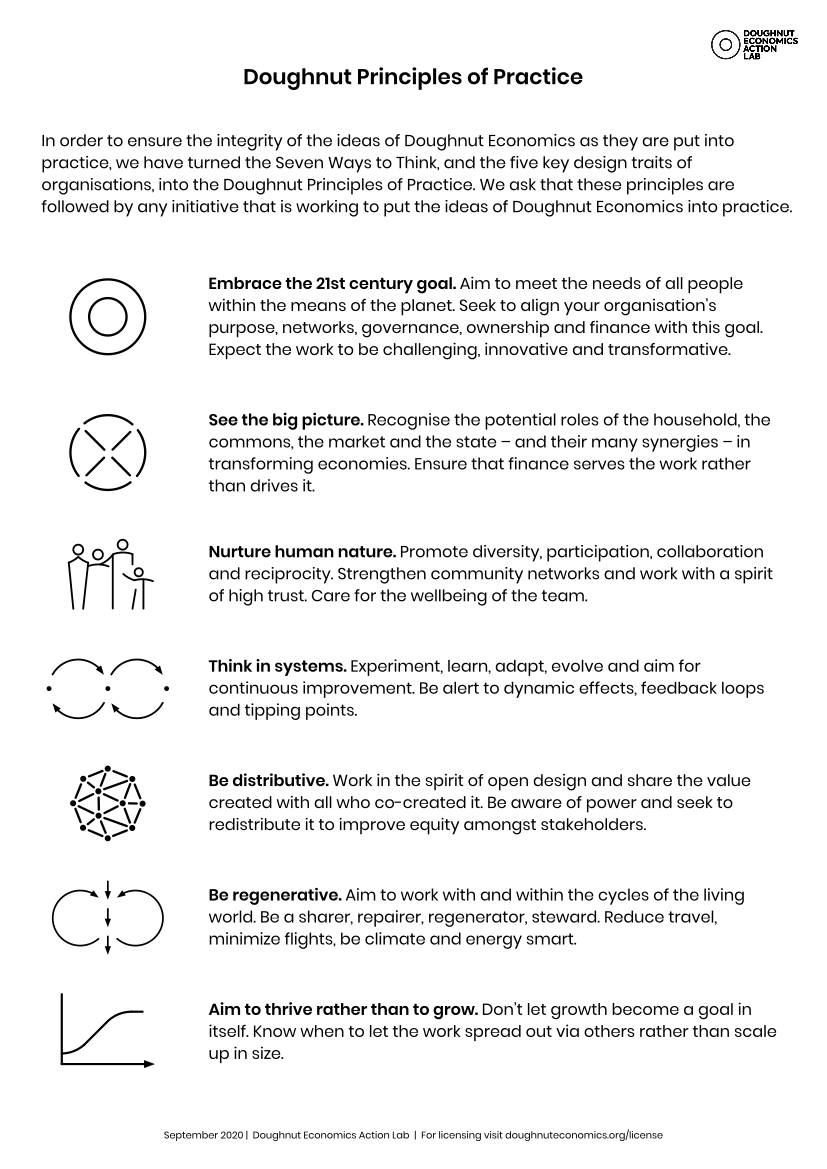